No 21st century image consultant would ever think to say this: you were created in God’s image, in his likeness. That means that to find your true self you should not just look inside yourself. The key to what is inside you is actually found outside you. You didn’t just develop. You were made–shaped by the hand of the master clay-shaper, knit together in your mother’s womb. God, who made you, is the Reality of which we are just an image, a likeness. Image is everything.

Genesis, as the revelation of beginnings, says that humanity is made in that image, nothing else. So what are those things that can only be said of human beings and God, and not of anything else in all creation?

For one thing, God is moral, and so we are (which, of course, means that we are capable of moral understanding and action, not that we always do it). Only human beings have the noble thought of “ought.” Oh, yes, your dog may have learned not to relieve himself on the carpet in the house, but this is primitive conditioning, hardly a thing we’d call conscience. Right and wrong. Just and unjust. Fair and unfair. Pure and impure. Proper and perverse. Murder is wrong for one reason alone: the image (Genesis 9:6). Unless a person has stiffened his conscience into complete insensitivity, seared it shut, killed it dead, he will still sense that there still can be found a bold black line between ought and ought-not. And for all the efforts of some in the modern world to make us believe that these impulses are merely the arbitrary tracings of social convention, we can still point to the soul-centered joy and satisfaction that we experience when we see the right done. Morality is not silenced.

For another thing, God is creative, and so are we. Now only God brings non-existent things into existence, but he apparently has passed onto us at least the ability to dream dreams that have never been dreamed before, to design buildings that have never been conceived before, to make a machine that will leave the orbit of the earth. Only from the human race has come the hanging gardens of Babylon, Romeo and Juliet, the Coliseum of Rome, and the U.S. Constitution. And that places human beings closer to God than any other creature. You will never find a robin returning to your backyard and deciding this spring not to make the same boring round nest, but a duplex instead. Or a square next. Or a nest made of mud instead of straw. No, the robin can only follow the innate instructions of its imprinted nature–it is extraordinarily uncreative. But we must remember that creativity is not in itself holy. Clever minds have also dreamed up the nightmares of the Tower of Babel, the rack, and the hydrogen bomb.

Then there is spirituality. God is spirit, and he created humans to be spiritual beings. Have you ever seen an animal seeking God? Now the real cynics of the world may think that shows just how wise the animals are. But most of us on most days know that we can do better than living merely as animals. You will never go to your kitchen in the early morning to find your cat or dog having a time of morning devotion. You will find no spiritual journal. Nobody has ever or will ever find in the deep dark forest a religious shrine that the woodland animals constructed in their search for communion with God. Whalesong, yes, but whale hymns?

For all the beauty of the natural world and the spectacular nature of its creatures, for all the evidence of divine theme and variation, complexity and simplicity, God did one more thing when he created humanity. He decided, and he said, let us make this one: “in our image.”

Because God is Father, Son, and Holy Spirit, it had to be “our,” not “my.” And here too is part of that image. “In the image of God he created him, male and female he created them.” Many Bible interpreters believe that the diversity of maleness and femaleness is as central to that image as anything else. God created not just a him, but a them. Unlike the philosophies and religions that portray the ideal as the blurring together of all things into a divine oneness, the Scriptures teach that the essential created nature of all things–the “image” of God in man–displays the splendor of diversity with unity.

Image-bearers will therefore authenticate and enhance the natural variations in the human family. In the church that means celebrating one body, many members. We will not criticize, demean, devalue, or ignore other brothers or sisters just because they are different. God’s image makes us a “them.”

Image-bearers will keep seeking God because they are distinctly spiritual creatures. They will strive to understand and to follow the “ought-ness” of the plan of life.

Image-bearers will not craft and polish their own image, but will realize our only hope is if God remakes the image again since it’s being so broken and tarnished by sin and evil in the world and in us.

And here is the assurance. God has made the image restoration possible in one great saving act. The Son became the Savior, and as the likeness of God, draws us to a different kind of mirror where we see, and are shaped by, his transforming image.

[Adapted from Putting the Pieces Back Together: How Real Life and Real Faith Connect.] 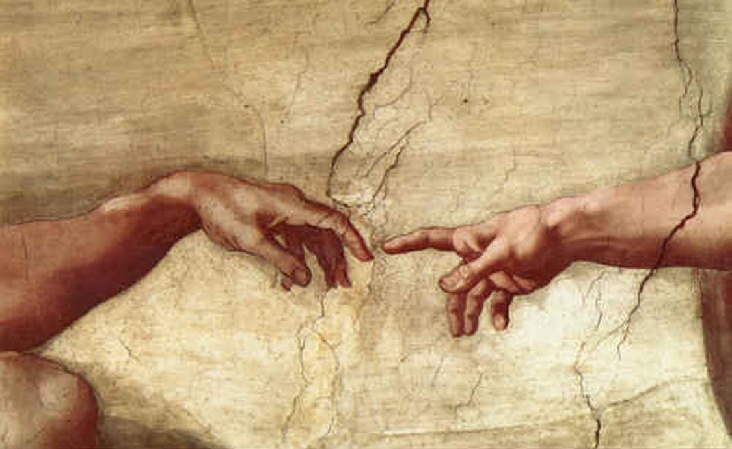