On this date in 1961 President Dwight D. Eisenhower gave his farewell speech to a national television audience and coined a phrase to describe a frightening new reality: “the military-industrial complex.” This was a kind of prophetic word, a warning to the whole world that a new monster of our own making was on the loose. 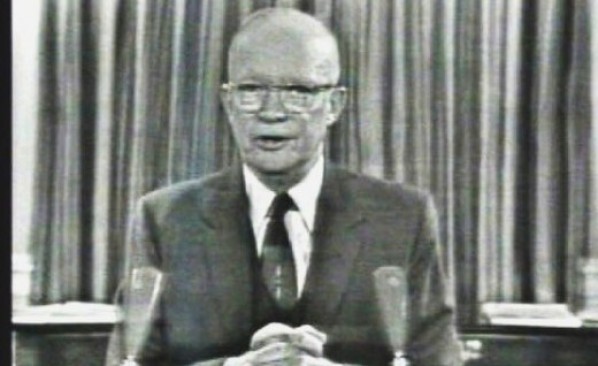 Weaponry was not new in the history of humanity, and modern industry was in its adolescence. But when they were merged–for the first time in human history–the making of war became the making of profit on an industrial scale. This monster has enormous power and it demands to be fed.

Eisenhower acknowledged that militarism had become a sad necessity, but warned: “we must not fail to comprehend its grave implications…. In the councils of government, we must guard against the acquisition of unwarranted influence, whether sought or unsought, by the military-industrial complex. The potential for the disastrous rise of misplaced power exists and will persist.” The warning did not come from an anti-military pundit, but from the general of generals himself, the Supreme Allied Commander during World War II, who had held the lives of millions of people in his hands.

So we ride a dragon today; or it rides us. And who knows how close the world is to experiencing the conflagration of one rash decision made by the dictator of a rogue nation?

When I read Eisenhower’s speech today, it made me think of how diligent we need to be in Christian causes to not let power get out of hand. It can happen to any human being or group. The roar of the engines we build has a hypnotizing effect.

It is not just that we need more leadership today. We need the best leadership–the kind that can discern the ways of the human heart. We need to know what we are capable of, the best and the very worst, and define “progress” accordingly.