James Davison Hunter’s new book, To Change the World: The Irony, Tragedy, and Possibility of Christianity in the Late Modern World, is engendering a lot of discussion. I found this book to be more captivating, compelling, and controversial than any I have read in a long time. People who like the book are hoping it will liberate Evangelicals from a view of mission that is unrealistic and misguided, and to temper Evangelical rhetoric and discourse about changing the world. As the saying goes, “words are cheap.” Christians are too inclined toward overstatement and braggadocio.

This gets shielded under the claim ofs “vision” and “passion” which are driving leadership agendas much more today than wisdom. It is easy to say, “we’re going to change the world.” It makes us feel good about what we are doing, and it also happens to be an effective fundraising technique. I still have a lot of my Lutheran roots in me, so I resonate with Hunter’s biblical interpretation which is measured when it comes to human accomplishment, but deeply respectful of the glory and power of God. We should be thrilled by any redemptive work happening anywhere. If something becomes a movement, better still. If thousand or even millions of people are affected, that goes to the glory of God. But none of these are the same thing as changing the world. 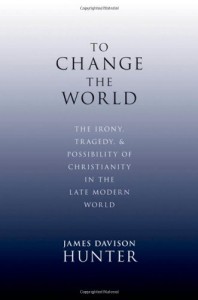 One has to wonder whether a lot of Christians have talked about changing the world, but never really believed it in the first place. They look for measured effects and called it world-changing. They just talk like that. But that is a problem of a different sort.

Hunter’s view of the redemption of creation is very helpful and is consistent with many epochs of Christian thought, more recently forgotten. His warnings of the perils of idealism are incisive. His emphasis on networks is very intriguing, and is consistent with what a lot of people are saying today about networks. His use of “shalom” as a paradigm of mission is good biblical soil for the roots of his thesis. His warnings about Constantinian-type triumphalism is very helpful.

It is going to be very interesting to watch how reaction to this book unfolds. It is provocative, and that is a good thing. He is surely going to be criticized for taking too much off the table, and offering too little in the end, as his last sentence says, that we should hope to make the world “a little bit better.” But we’ll see.

One thing that I think could have helped his conclusion is to back it up with the mystery of the work of God’s kingdom. Ultimately, we don’t know and we’re not told exactly what God intends to do in affecting or changing the world (that is, before we get to a whole new creation). We know we’re working with mustard seeds and leaven. But only God knows just how far the pervasive effects of his ruling power will go in this age. And that is what allows us to keep doing ministry with freedom.