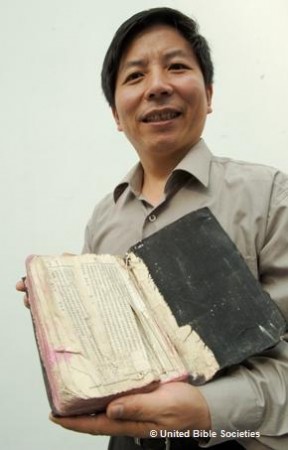 Jiang Yuchun was a boy the first time he attended a Christian gathering in a home in Anhui Province, China. He and his father walked fifteen miles under cover of darkness because any kind of Christian gathering during the Cultural Revolution of 1966 to 1976 was an act of subversion according to government policy. Thousands of believers were martyred during those dark days; every Christian leader exposed was imprisoned or killed; the Bible was practically extinct.Yuchun watched the leader teaching the group, holding a tattered copy of the Bible tightly in his hand. The pages were torn and dirty, the corners worn to a rounded shape.

The red edging had been worn to a faint pink. The cover hung by a thread to the binding. The preacher, who travelled from one location to the next to teach even during the Cultural Revolution, would not allow anyone to touch this Bible. Too much was as stake. But one day, one time, he allowed Yuchun to take it for a moment to glance at it. Yuchun was only in elementary school, so he could not make out much of the traditional Chinese script, but decades later he still remembered the reverence, awe, and joy he experienced when he held that subversive book in his hands.

8 thoughts on “That Subversive Book”