The village of Lalibela in northern Ethiopia has some of the most unique church structures in the world. Commissioned by the 12th century Ethiopian King Lalibela, the 11 churches, which lie beneath the surface of the ground, were carved out of the solid rock of the land. Services still take place daily. Over 80,000 people visit the place every year.

As extraordinary as these edifices are, their significance pales in comparison to Jesus’ words to Simon Peter—as he combined the imagery of solid rock with the promise that he would build his church.

Jesus asked his disciples, “Who do you say I am?” and Peter had the right answer: “You are the Messiah, the Son of the living God” (vv. 15-16). This confession of Jesus’ identity resounds through the ages and is the bedrock of Christian teaching and doctrine. Jesus responded to Peter with a subtle play on words: You are Rocky [in Greek, petros], and on this rock [petra] I will build a fellowship of forgiven, redeemed people. My church.

Jesus was referring not only to Peter’s confession, which became the bedrock of the apostles’ teaching, but to Peter himself—a flawed and rugged fisherman who, with others, was prominent in the early years of the church’s growth. Under Peter’s leadership, Jesus would build his new community and the “gates of hell” would not stop its advance. Why? Because the building of this new, covenant people is God’s work. Jesus said: I will build my church.

This passage is a reminder that God uses fallible people to declare and live out the divine message of the kingdom of God—people like Peter and millions of others throughout church history. God gives these people, his church, authority (“the keys of the kingdom of heaven”) to help people in bondage. Amazingly, this all is part of God’s plan of building his church.

The ancient church structures of Lalibela are a man-made wonder carved in rock. The world-wide community of Jesus Christ is a divine work built on the rock of the apostles’ teaching using flawed but faithful people.

PONDER: How have you seen God at work building his church? 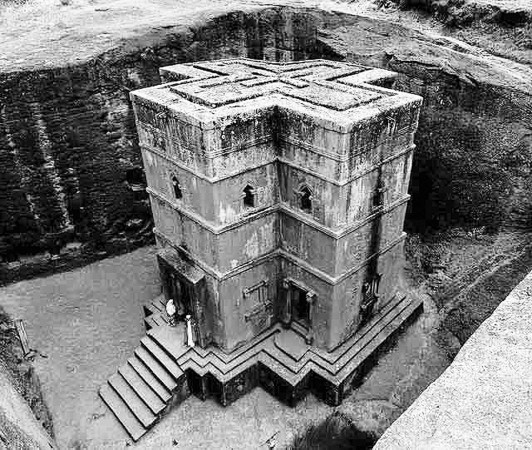 One of the 11 rock churches that are located in Lalibela, Ethiopia.

One day Jesus asked his disciples: “Who do you say I am?” It was Peter who answered with confidence: “You are the Messiah.” Jesus then told Peter that he would build his church, and that Peter’s confession, faith, and life would be part of that beginning! God is still building his church on those who confidently declare that Jesus is the Messiah.

Read Matthew 16:13-20. If someone asked you, “Who is Jesus?” how would you respond? What are ways that you have been able to share the Good News about Jesus with others? How have you seen God at work through your church?