This is the account of Shem, Ham and Japheth, Noah’s sons, who themselves had sons after the flood. Genesis 10:1

Do you remember the Christian children’s song “Jesus Loves the Little Children”? He loves all the people of the world, red, yellow, black, white, and brown. They are all precious in His sight. But one of the consequences of growing up in a race- and color-conscience society is that many people either have a sense of pride or a sense of shame regarding their race. Race and color give people a sense of identity.

Let’s explore the biblical history of race. In Genesis 9, a drunken Noah pronounced a curse upon his grandson, Canaan, after Noah’s son Ham exposed Noah’s nakedness. “Cursed be Canaan! The lowest of slaves will he be to his brothers.” Some Americans have misinterpreted and misapplied this prophesy so that black Americans have been physically, spiritually, and emotionally treated as inferior and subjected to a history of slavery. However, Noah’s prophecy actually contained an outline of human history.

Genesis 9 and 10 tells us that the entire earth was populated from the sons of Noah, and the table of nations came from the descendants of Japheth, Ham, and Shem. These great family lines are associated with Indo-Europeans (Japheth); the Semitic peoples (Shem), which include Hebrews and Arabs; and the peoples of Africa, Native America, and South Sea Islanders (Ham). (For instance, the descendants of Ham are associated with North Africa in Psalm 78:51; 105:23,27; 106:22; and 1 Chron. 4:40.)

Each of the three families made significant contributions to mankind. The Shemites gave us religions including the Bible and the Koran. The Hamites gave us metallurgy, weaving, agriculture, architecture, medicine, and other technologies; while the Japhethites contributed philosophy but also developed Ham’s inventions. Ham’s descendents included the Babylonians and Sumerians, who founded the first two great empires.

Every racial group in the history of mankind contributed significantly to culture.

George Washington Carver, a Christian black man, was born into slavery in Missouri, and he became an inventor and botanist who taught at the Tuskegee Institute. He developed more than 100 products made from the peanut. So, true to Noah’s prophecy, the descendants of Ham have been the great “servants” of mankind by their inventions and contributions.

PONDER: “From one man he made all the nations, that they should inhabit the whole earth; and he marked out their appointed times in history and the boundaries of their lands.” Acts 17:26 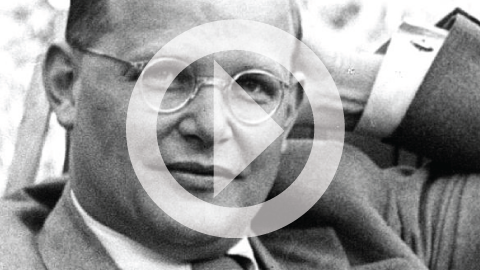 On April 9, 1945, Dietrich Bonhoeffer was executed at the age of 39. He is known as one of the premier theologians of the 20th century. His book, The Cost of Discipleship, has influenced many Christians, causing them to follow Jesus in a deeper way. Although Bonhoeffer already had two doctoral degrees and an appointment to teach theology in Berlin, he stated that he did not truly understand what it meant to follow Jesus until 1930, sitting under the teaching of Pastor Adam Clayton Powell at the Abyssinian Baptist Church in Harlem, New York.

During his seminary studies, one of his classmates, Albert Fisher, opened his eyes to the issues of racism in America. Bonhoeffer traveled with Albert to his home in Alabama during his semester break in 1930. While traveling back to New York, Bonhoeffer wrote to his brother about his observations:

The separation of whites from blacks in the southern states really does make a shameful impression. In railways that separation extends to even the tiniest details…. The way
the southerners talk about Negroes is simply repugnant, and in this regard the pastors are no better than the others…. It is a bit unnerving that in a country with so inordinately many slogans about brotherhood, peace, and so on, such things continue completely uncorrected.

These relationships and experiences would greatly impact Bonhoeffer’s reaction to the Nazi regime in Germany. Bonhoeffer came from the privileged class of Berlin; but while in Harlem, he had the opportunity to see the world from the perspective of the outcasts, the powerless, and the oppressed, observing that one’s relationship with Jesus grows in the midst of personal suffering. He saw Christians who engaged with their faith in every area of their lives, placing their lives under the rule of the gospel.

Upon his return to Germany, he recognized distortions in German Christianity and spoke against the Nazi regime. He gave up a bright future in the academic world and chose to stand with the racial outcasts both in America and Germany. For that, he paid with his life.

17 thoughts on “Red and Yellow, Black and White”