And he has committed to us the message of reconciliation. We are therefore Christ’s ambassadors, as though God were making his appeal through us. We implore you on Christ’s behalf: Be reconciled to God. 2 Corinthians 5:19-20

Shirley Temple Black starred in over forty films before her twelfth birthday. Decades later she entered diplomatic work and served as U.S. Ambassador to Ghana and Czechoslovakia. During those years, she once stated: “There are many of us who should be in a position to bring peace to the world.”

Unlike Ms. Black, in the ancient world ambassadors were older, experienced men commissioned for a special assignment. However, like Black, they acted and spoke on behalf of the nation or power that sent them. Indeed, then and now, ambassadors are both messengers and representatives.

In his letter to the Corinthian church, Paul’s discussion of the possibility and reality of reconciliation between God and the human race points out the daunting yet amazing mission that God has given to his reconciled people, namely that all have become ambassadors (not just older experienced men!).

Paul uses ambassadors to broadly describe the people of God. This term suggests that Christ’s followers are both mouthpieces and models of reconciliation. The gospel entrusted to ambassadors solves the enmity and separation that exist between God and humanity. The life-giving sacrifice of Jesus on the cross makes possible a restored and reconciled relationship between God and people. Hostility, enmity, and separation from God are turned into harmony, peace, and reconciliation! Human beings and God can get together! Love wins out because of what God has done, and he calls his people to proclaim this message as well as live it out in our human relationships.

Ambassadors by definition work in a foreign land and are expected to represent well the nation that sent them. The honor and reputation of that nation is at stake; therefore the message they proclaim and the model of their lives come together in their ambassadorship. This describes the Church and its mission: Mission encompasses the message we share with our mouths and the lives that we live in our communities. Mission flows out of the reality that God was in Christ, reconciling the world to himself and is carried out locally and globally.

As Christ’s ambassadors, we might rephrase Ms. Black’s original statement this way: All of us are in positions to bring peace with God to the world.

PONDER: Who can you pray for and share with that needs to experience reconciliation with God?

A Different Kind of Ambassadorship 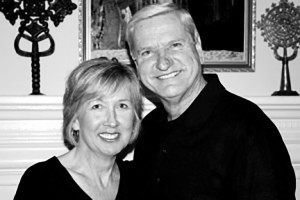 I had the joy of growing up in Ethiopia where my mother and father were missionaries with SIM. When I was in college, I had a desire to join the U.S. State Department and one day represent the United States as America’s Ambassador to Ethiopia.

But while attending the Lausanne Congress on World Evangelism in 1974, I sensed God’s call on my life in a powerful way. I witnessed leaders from more nations than the United Nations, filling the stadium in their colorful national dress. After hearing challenge after challenge of taking the gospel to the whole world, I felt led to work cross-culturally in missions. This was a death of one vision and now a new one.

While serving as a missionary in a remote part of Nigeria, I met the foreign minister, which led to meeting top-ranking officials in the government where I was able to have an influence.

A few years later, I met and married Kay, and we went to Nigeria where we worked with government and business people and led Bible studies with diplomats. Later we ended up in Ethiopia, where we were on the pastoral staff of the International Evangelical Church, which had sixty-plus nationalities. Again we developed relationships with diplomats and government officials. Those years were challenging because of a cruel Communist regime, which severely persecuted the Church. At night we trained Ethiopian church leaders, and they shared what they learned with the underground Church. The Church grew in strength and numbers, today numbering 8,000 churches.

The Lord also gave us wonderful relationships with the president, the prime minister, and many senior government officials and senior business leaders. To this day we pray with them and encourage them in their walks with Christ.

I had dreamed of being a U.S. ambassador, but God had in mind a different kind of ambassadorship for Christ.